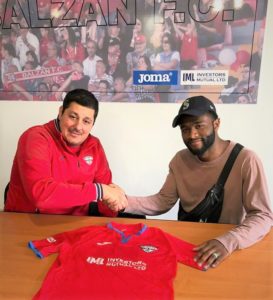 Seyi joined American team UCLA Bruins FC in 2014. Two years later he was transferred to Golden State FC and in 2017 he joined and played for another American team : Saunders FC.

Balzan President Anton Tagliaferro said : ” Seyi is a very fast and strong player who we believe will do very well playing for Balzan in the Premier League.”

Vladimir Simovic, Balzan Sporting Director said ” Seyi is a very strong addition to our squad. He played for Seattle in the MLS in the US and I had the opportunity to see him pay in the Danish Premier Division of Denmark with Vendsyssel against the likes of FC Copenhagen and other top teams there, where I was impressed by his speed and ability. We are very pleased to have another player of such pedigree in the Balzan squad .”