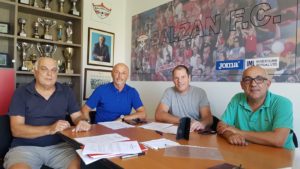 Balzan FC appointed Mark Miller as its new first team coach for the next two seasons while Joseph Grech was appointed as his assistant.

Club President Anton Tagliaferro said : “ After a thorough search and discussions with various parties, I am very pleased to announce that Mark Miller was selected as the new coach of Balzan FC for the next 2 years with immediate effect. Mark brings with him an excellent track record of success in Maltese football and brings with him a very disciplinarian, professional, passionate and hard-working approach. Joe Grech has been appointed as Mark’s Assistant Coach”

“We have the core of an excellent team with a good blend of experience and youth. Regarding the many promising young players coming through from our Academy, I am looking forward to Mark developing our young players to the best of their ability, particularly given Mark’s extensive experience of coaching the Malta under 21 squad earlier in his career.”

Mark Miller said : “ I am really pleased to have joined Balzan FC. It is a club that I have always admired from afar given how the club has progressed since its promotion to the Premier League in 2010. I look forward to working closely with everyone at the club – including the club President – to help the club achieve on its potential in the next two seasons.”

“ Now that I am on board I look forward to working with the President to put together a competitive squad that plays consistently good football and that gives it’s 100 % every day in training and every weekend on the pitch.“