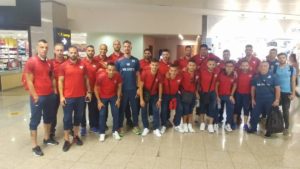 On Tuesday 13th June 2017 Balzan FC squad composed of  22 players, 3 coaches, physiotherapist, kit manger and the Sports Director left for Slovenj Gradec  in Slovenja for a training camp in preparation for the UEFA Europa League preliminary round games,due to be played on 29th June and 6th July 2017.

The contingent will be returning back to Malta on Thursday 22nd June 2017. due