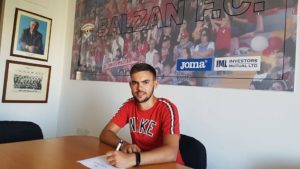 Balzan FC’s intention of giving a younger look to their first team squad has increased by handing a new contract to another promising player of their team, Sean Cipriott.

Last season, midfielder Sean Cipriott was on loan with Senglea A FC where he was one of the key players of their Senior team in the Premier League. His performances has earned the support of the club who have decided to include him with Balzan FC first team, handing him a new two-year contract.