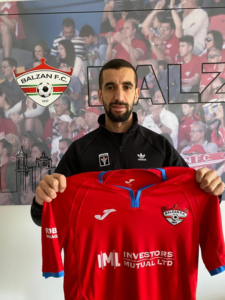 Aleksa started his professional football carrier in 2008 in Serbia with FK Beograd.

In 2009 he moved to Macedonia where he joined FK Metalurg Skopje.

In 2011 he went playing in Poland with Sadecja Nowy Sacz FC.

In 2012 he joined the club in Bosnia & Herzegovina – FK Radnick Bijelc and later in the same year he joined GFK Jagodina in Serbia.

In 2015 he went to Croatia where he registered with NK Istra.

In 2016 he joined Zira FF of Azerbaijan.

In 2018 he returned to playing in Serbia with FK Vojvodina Nova Sud.

In 2019 he went playing in Australia with Central Coast Mariners FC.

At the beginning of this season 2020/2021, he joined FK Rad of Serbia and now he decided to come to play in Malta with Balzan FC.