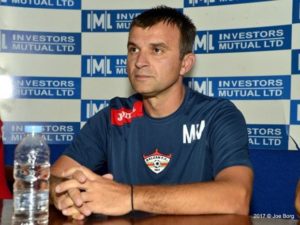 Marko Micovic is no longer the head coach of Balzan FC.

The Serbian coach on Sunday informed the Balzan FC committee that he was stepping down from his role with immediate effect.

Micovic took the decision following Friday’s disappointing 2-1 defeat to Senglea Athletic that left Balzan in the sixth place in standings, ten points behind Valletta and Hibernians.

Vladimir Simovic, Balzan’s technical director, said that Marko has tendered his resignation as coach of Balzan FC as he felt that Balzan needed a change that would help the club reach the objectives set for the season.

The defeat to Senglea Athletic was hard for him to understand. it left him with no other option than to leave for the good of the club.

“Marko feels that the team needs to make some changes at the helm that will act as a wake-up call for all the players in the first team squad. Hopefully, having somebody new in charge of the team will give the team the opportunity to refocus and put itself in a position to challenge for the goals set for this season.”

The defeat to Senglea Athletic was a huge blow for Balzan’s hopes of challenging for a top four position in the Premier League and left a bad taste on the club, following all the investment made during the January transfer window.

Last month, Balzan brought in Bosnian defender Aleksandar Kosoric and midfielders Steve Pisani, who was signed from Floriana, and Paul Fenech, who started the season on the books of Birkirkara FC.

That investment was earmarked not only for a strong showing in the league but also to try and challenge for the FA Trophy, where Balzan have reached the quarter-finals where they will play Tarxien Rainbows later on this month.

No decision has been made yet on who will be Marko Micovic’s replacement at Balzan.

In the meantime, the Balzan squad will be under the charge of the assistant coaches Velibor Kopunovic and Alejandro Pantoja.

Following the decision for a change, Balzan FC committee and supporters would like to take this opportunity to thank coach Marko for all the success we all shared with him including being a whisker away from being the Champions of Malta in season 2018/19 as well as success in the 2019/20 Europa League with historic victories and great performances for Balzan vs Kesla and Slovan Bratislava..